The first Joint Strike Fighter aircraft to be ordered by the Netherlands, an F-35A to be used in the Operational Test & Evaluation (OT&E) program for the type, will cost approximately $142 million, the Netherlands defense ministry said October 17.
The Dutch are planning to participate in the OT&E program with two aircraft, the preliminary order for the first of which is to be placed at the end of this year.
According to the defense ministry, Lockheed Martin will start ordering long lead items for the OT&E aircraft at the beginning of 2008, and The Hague is expected to pay 10% of the cost of the first jet, an estimated $14.2 million, at that point.
The final and legally binding contract for the first aircraft is to be signed in 2009, the ministry says.
The second OT&E aircraft is to be ordered one year later.
The OT&E aircraft are standard F-35A production aircraft equipped with test instrumentation. 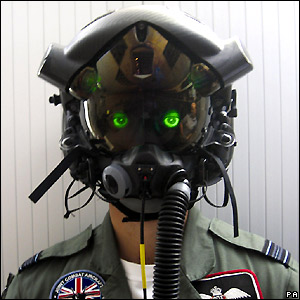 This is how the next generation of RAF fighter pilots will look.

And with piercing green eyes staring out from behind the visor, it's no surprise that the helmet has been compared to Arnold Schwarzenegger's killer robot in The Terminator.

Pilots flying the F-35 Joint Strike Fighter will have an astonishing array of technology encasing their heads - enabling them to see right through their own aircraft fuselage to the ground below.

A series of cameras on the outside of the stealth warplane feed high-resolution images into the helmet, including infra-red images at night, which are then projected on to the inside of the pilot's visor.

Special sensors inside the cockpit track the movement of the helmet, so that when the pilot turns his head his view of the skies or ground outside changes accordingly.

When he looks down he sees not his own feet on the cockpit floor but the ground below, slipping past at hundreds of miles per hour.

On-board computers also feed in essential flight and combat data on to the display, as well as superimposing target symbols to locate enemy and friendly aircraft or ground targets, even if they are too far away to see with the naked eye.

The supersonic Joint Strike Fighter is due to replace the Harrier jump jet, and is being developed jointly with America.

Scroll down for more ...

Cutting-edge: Cameras are attached to the outside of F-35 Joint Strike Fighters to give pilots all-round vision

Prototypes were used in flight by U.S. pilots earlier this year and are now being assessed by engineers at Boscombe Down in Wiltshire.

A Ministry of Defence spokesman said: "The computerised symbology will be displayed directly on to the pilot's visors, providing the pilot with cues for flying, navigatingand fighting the aircraft.

"It even will superimpose infra-red imagery on to the visor to allow the pilot to look through the cockpit floor at night and see the world below - like something out of Terminator."

Lockheed Martin has been handed another $134 million contract to develop a "partner version" of the JSF "that meets U.S. National Disclosure Policy, but remains common to the U.S. Air System, where possible." That's on top of $603 million awarded for the same basic job four years ago.

That's pretty close to the billion dollars that USAF Lt.Gen. Jeffrey Kohler, head of the Defense Security Cooperation Agency, said would be needed to create a sanitized F-22 for Japan.

The Delta SDD program mentioned in the contract documents is an interesting beast. Look at papers from the Netherlands from 2004 - when opposition politicians asked after the 2003 contract whether it meant that the Netherlands were getting a less-stealthy JSF. They stress that the Delta SDD covers things like nationally required features (for instance, Norway wants a braking parachute) and nationally specific weapons - if someone wants IRIS-T, for example.

But that clashes with the bald statement in the Pentagon contracts that the $737 million program is about security and protecting US technology, by delivering air vehicles that are different from US air vehicles - "as common as possible". Also, features such as nationally required weapons wouldn't be covered in SDD, which has a defined set of weapons to be cleared for the Block 3 configuration - the endpoint of SDD.

Does this mean that there are two or more versions of the JSF, with differing uses of sensitive technology - meaning, in most people's eyes, stealth? It's certainly possible, because key LO features - such as the edges of the wing and chine and surface coatings - are built in secure facilities and added after major assembly - as can be seen in an unpainted F-22.

The decision on whether to release stealth technology is also not up to the JSF program office, but to a high-level group called the LO/Counter-LO Executive Commitee (LO/CLO-Excom).

JSF program vice-president Tom Burbage has said that "we are not designing multiple versions of the aircraft" but that, in addition to the multilateral operational requirements document (ORD), there are bilateral annexes signed by each export customer - so export requirements may differ from the ORD. And while there may not be different versions, there are clearly $737 million-worth of different configurations.

Moreover, then-US Ambassador Bob Schieffer told the Australian parliament in 2004 that Australia would get "the stealthiest airplane that anybody outside the United States can acquire. ...Having said that, the airplane will not be exactly the same airplane as the United States will have."

In 2006, Lockheed Martin was saying that Schieffer's "public comments two years ago should not be judged as reflective of relevant program configuration information today" but that "partner countries will receive airplanes that are compliant with their requirements". (Emphasis added.)

There is also the technical possibility that a JSF version "meets national disclosure policy" not by having sensitive technology removed from it but by incorporating anti-tamper measures. It's a possibility, but a distant one.

Thinking about this too much can drive you into the loony bin. Absent, however, from any of this discussion has been one thing: a firm unequivocal statement, from someone who knows that they are authorized to give it, that every JSF built will have identical qualities in terms of signatures.

Until then, everyone is going to wonder what that $737 million actually covers. And competitors will continue to point out that if your JSF is not as stealthy as the US JSFs in the theatre, your primary mission will be that of an armed decoy.

UPDATE: This has launched a discussion over at F-16.net. Subject to the usual caveat - forum posters may pass as insiders even if they're 300-pound, pizza-and-Bawls-fueled, Mom's-basement-dwelling gamers - these are interesting comments:

LMAggie: "Shape is only one part of LO, another crucial part is the coatings. These coatings, and all information regarding these coatings, are export controlled and are not releasable to foreign countries. I have no clue what the path forward for the partner countries is..."

Roscoe: "I won't even begin to describe how complex those discussion were when I was in SAF/IA, but suffice it to say the various issues brought up in this thread are but the tip of an iceberg."

The F-35B version of the Joint Strike Fighter made its début on Dec. 18. The inlets of its lift fan are visible behind the cockpit. (Lockheed Martin photo)

FORT WORTH, Texas --- The Lockheed Martin F-35B Lightning II, the first fighter to combine stealth with short takeoff/vertical landing (STOVL) capability and supersonic speed, made its debut today amid customers from the United States Marine Corps, the United Kingdom’s Royal Navy and Royal Air Force, and the Italian Air Force and Navy.

Attendees at the rollout ceremony in Lockheed Martin’s Fort Worth assembly plant included Marine Corps Commandant Gen. James Conway. “The flexibility that the STOVL variant of the F-35 will add to the contemporary Marine Air Ground Task Force is amazing,” Conway said. “This generational leap in technology will enable us to operate a fleet of fighter/attack aircraft from the decks of ships, existing runways or from unimproved surfaces at austere bases. We find that capability extremely valuable.”

The F-35B, designed to replace Marine Corps AV-8Bs and F/A-18s, is one of three variants of the Lightning II. Its first flight is planned for mid-2008, following a series of extensive ground tests. The F-35A conventional takeoff and landing version began its flight test program in December of 2006. The F-35C, designed for catapult launches and arrested recoveries aboard large U.S. Navy carriers, will make its inaugural flight in 2009.

The heart of the F-35B is a STOVL propulsion system comprising the most powerful engine ever flown in a jet fighter, a shaft-driven counter-rotating lift fan situated behind the cockpit, a roll duct under each wing for lateral stability, and a rear 3-bearing swivel nozzle that vectors engine exhaust in the desired direction.

During vertical or short takeoffs, or vertical landings, doors above and below the lift fan open, and a clutch connecting the lift fan to the engine drive shaft engages. A dorsal auxiliary engine inlet opens to increase airflow to the engine. At the same time, doors beneath the 3-bearing swivel nozzle open and the rear nozzle pivots downward, deflecting engine thrust toward the ground. Roll ducts under each wing also are engaged, keeping the aircraft laterally stable. In this configuration, the F-35B can hover, land vertically, take off in a few hundred feet fully loaded, or take off vertically with a light load. When the aircraft transitions from jet-borne to conventional wing-borne flight, the doors close and the pilot can then accelerate to supersonic speeds. The system is completely automatic.

The Lockheed Martin X-35B successfully demonstrated the shaft-driven lift fan propulsion system in 2001, becoming the only aircraft in history to execute a short takeoff, level supersonic dash and vertical landing in a single flight.

The Pratt & Whitney F135 engine will power the first series of F-35Bs. The F136, an interchangeable engine under development by the GE Rolls-Royce Fighter Engine Team, will make its first F-35 flight in 2010. Rolls-Royce produces the shaft-driven lift fan, 3-bearing swivel nozzle and roll duct systems.

An additional six development STOVL F-35s are now in production across the worldwide F-35 supply chain. In 2007, long-lead procurement funds for the first six production STOVL aircraft were authorized, with the first Marine Corps training jets planned for a 2011 delivery.

Headquartered in Bethesda, Md., Lockheed Martin employs about 140,000 people worldwide and is principally engaged in the research, design, development, manufacture, integration and sustainment of advanced technology systems, products and services. The corporation reported 2006 sales of $39.6 billion. (ends)
Anyone who fights for the future, lives in it today
Нагоре

"I do not believe the F-22s will be replacements for the F-15," Deputy Defense Secretary Gordon England said at a Senate Budget Committee hearing on the Pentagon's fiscal 2009 budget request. The Boeing Co (BA.N: Quote, Profile, Research) F-15 is an older-model fighter that has been subject to groundings in recent months after one broke up in flight.

The F-35 is a family of warplanes for the U.S. Air Force, Marine Corps and Navy, as well as for export. Current Pentagon plans call for production of 2,458 aircraft in three versions over a 28-year delivery period.

The Defense Department left the F-22's fate uncertain in the $515.4 billion military spending blueprint sent to Congress a week ago. The budget lacks funding to shut down the F-22 line as well as any seed money for future purchases.

But the head of a House of Representatives panel that funds the U.S. military said Tuesday he opposed shutting down the F-22 line.

"We don't want to see the F-22 line shut down," Rep. John Murtha, chairman of the House Appropriations Subcommittee on defense, said in an interview after speaking at a defense technology conference sponsored by Aviation Week magazine.

He said he would recommend the purchase of 14 C-17s with funds from the supplemental budget Bush is seeking in fiscal 2008 to fund the wars in Iraq and Afghanistan.

http://www.reuters.com/article/rbssIndu ... =0&sp=true
Anyone who fights for the future, lives in it today
Нагоре


"We believe that JSF costs will likely be much higher than reported," the GAO said in its report, "Joint Strike Fighter, Recent Decisions by DOD Add to Program Risks,".