Captain John "Otter" Stratton is a young American fighter pilot who flies the F-15 Eagle, arguably the most potent and successful fighter plane ever built. He was eight years old when he decided to become a pilot. It wasn't a tough decision -- his grandfather was awarded three Distinguished Flying Crosses and 11 air medals as a fighter pilot in the Second World War. As far as John was concerned, his grandfather had won the war all by himself in his beautiful blue Corsair. His grandfather was a hero and he intended to follow in his footsteps.

At Red Flag, the international training exercise for the air forces of allied countries, hundreds of pilots meet for the most challenging flying of their careers. Red Flag is the final tune-up training for pilots and their crews before being sent into actual combat. The object is to make the exercises as real and challenging as possible -- to take the pilots, ground crews, mechanics, rescue personnel, etc., to the limits of what they can handle.

We follow our young pilot as he makes his way through this extraordinary event held in the desert of Nevada. He is amazed at how complex, confusing and dangerous the exercises are.

He also begins to notice team members who were absent from his childhood vision of heroism. There are people who work all night rebuilding engines and re-installing them into his aircraft so he can keep flying and training. There are people who rise at four-thirty each morning to scour the runways for tiny pebbles that can get sucked into engines and kill pilots. There are people who practice rushing into a flaming mockup of a crashed aircraft so if there is a real accident they will be ready to save the pilot. In the flying exercises, John realizes there are other pilots who aren't just out to prove themselves -- they are helping him -- watching his back, taking personal risks to cover his mistakes. And he is doing the same for them.

He begins to think that being a hero is not quite as simple as he once believed. Captain John Stratton has gone on from Red Flag to serve three combat tours over Afghanistan and Iraq. Although he has seen much sacrifice and courage from other fighter pilots during his years in the Air Force, the extraordinary people he remembers are not just the pilots, but the whole team supporting from the ground as well as the entire USAF Air and Space Force.

Now, as Stratton reflects from the cockpit of his F-15, squinting out into the evening light across the vast blue sky, his wingman aboard an F-15 Eagle vanishes for a moment, and in his imagination another aircraft flies beside him. It is a beautiful blue Corsair, a glowing phantom from another age. 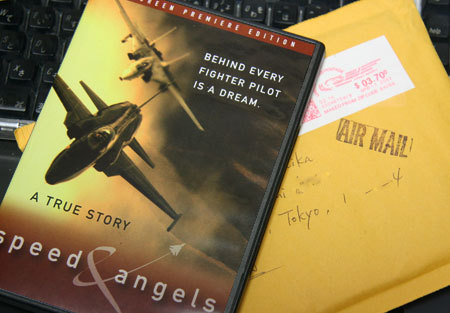 In 2003, Director Peyton Wilson entered the world of U.S. Navy fighter pilots. Thanks to unprecedented access granted by the Navy, Peyton captured and created the most intimate film ever made on fighter pilots. Epic High Definition aerial footage and stunning cockpit photography provide a dramatic backdrop for the larger story of fighting for your dreams.

Inspired by the passion of two young Navy officers she encountered, Peyton followed Jay and Meagan as they chased their childhood dream of becoming naval aviators flying the F-14 Tomcat. Their two and a half year journey takes them through dogfights in the Nevada desert, night landings on aircraft carriers off the Atlantic coast, and eventually to the biggest challenge young officers face: wartime deployment to Iraq.

What begins as a story of realizing a childhood dream turns into a story of fighting for one's life and career as Jay and Meagan face the realities of war.

Based on the original concept of producer F.A. Chierici, Speed and Angels is an action-documentary directed by Peyton Wilson.

Top Gun gets the reality-TV treatment in American Fighter Pilot, a riveting seven-hour TV series that grants an all-access pass to the Air Force's most elite pilot training program. Produced immediately following the terrorist attacks on New York's World Trade Center on 9/11/01, this is a serious examination of Air Force culture and the profound responsibility of warriors-in-training. The glory and glamour of being an F-15 "Eagle Driver" is presented as a noble privilege, in addition to the sheer adrenaline rush of piloting the Air Force's most versatile jet-fighter killing machine. Coproduced by Top Gun director Tony Scott and his director brother Ridley, and created with intelligent focus by Jesse Negron, AFP follows every stage of a pilot's rigorous 110-day training course at Tyndall Air Force Base in Florida, where "Top Gun" hopefuls endure an intense regimen of academics, flight simulation, two-man flights with intensely critical trainers, solo flight tests, basic fighter maneuvers, weapons deployment, dogfight combat scenarios and, ultimately, the selection of a "Top Gun" pilot in each graduating class. There's plenty of high drama and male bonding to accompany AFP's wall-to-wall soundtrack. Most of the series' appeal comes from its focus on three well-chosen pilots-in-training: A promising Top-Gun candidate with prior experience as a B1 Bomber pilot; a devout Christian and expectant first-time father; and a hot-shot maverick who learns there's more to being a fighter-ace than living the Tom Cruise lifestyle. Their different personalities give the series a perfect blend of style and substance, and the constant threat of failure gives each of them added depth and conviction that anyone can relate to. These are proud, respectable young men who are living their dream, but AFP never forgets the higher purpose to which they've been called. A basic "making-of" featurette shows how the series' amazing in-flight footage was achieved.

Dogfights is a military aviation themed TV series depicting historical re-enactments of air-to-air combat that took place in World War I, World War II, the Korean War, and the Vietnam War, as well as smaller conflicts such as the Six-Day War, and the Falklands War. The program, which airs on the History Channel on Thurdays at 11:00 P.M. (EST), consists of former fighter pilots sharing their stories of actual dogfights in which they took part, and uses state-of-the-art computer-generated imagery (CGI) to give the viewer a better perspective of what it is like to partake in aerial combat ('camera' shaking when a plane makes a close pass or an explosion occurs close by adds to a realistic 'live experience', reminiscient of the Ace Combat game series). The series premiered on November 3, 2006.

01. Kamikaze (7/13/07): Towards the end of World War II, Japan sent volunteer pilots on suicide attacks against American naval targets. Kamikaze attacks covered include those against the escort carrier USS St. Lo on October 25, 1944, and the destroyer USS Laffey on April 15, 1945. Also discussed is the use of Japanese Ohka rocket planes.
02. The Luftwaffe's Deadliest Mission (7/13/07): German ramming of American bombers by the Sonderkommando Elbe, on April 7, 1945. Note: This episode is sometimes combined with the previous one and shown as a single, two hour episode called "Kamikaze".
03. Jet vs. Jet (7/20/07): In the skies over North Korea, F-86 Sabres battle MiG-15s. American pilots such as James Jabara, Ralph "Hoot" Gibson, and Ralph Parr are in pursuit of a previously unknown achievement — the title of jet ace.
04. Thunderbolt (7/27/07): The rugged P-47 Thunderbolt, or "jug" as it was known, was the largest single-seat fighter plane of World War II. The episode portrays aerial battles fought by Robert S. Johnson, George Sutcliffe, and Ken Dalhberg.
05. Gun Kills of Vietnam (8/3/07): The era of missiles had arrived, and electronic warfare was coming of age. But when technology failed, pilots were forced to do combat the old-fashioned way — with guns. Clinton Johnson and Charles Hartman down a MiG-17 with propeller-driven A-1 Skyraiders; Robert Titus and Milan Zimer's F-4 Phantom shoots it out with a gun pod against MiG-21s; Darrell Simmonds and George McKinney's Phantom fights MiG-17s.
06. Desert Aces (8/10/07): Pilots of the Israeli Air Force. The episode covers combat missions flown by Ran Ronen and by "ace of aces" Giora Epstein. Ronen used the French-built Mirage III to engage Hawker Hunters. Epstein flew a Mirage against Egyptian Sukhoi Su-7s in the Six-Day War, and piloted a Nesher against MiG-21s in the Yom Kippur War.
07. The First Dogfighters (8/23/07): Dogfighting was invented by the fighter pilots of World War I. Ernst Udet's Albatros D.III vs. Georges Guynemer's SPAD VII. Werner Voss, flying a Fokker triplane, battles six S.E.5a pilots, including James McCudden, Arthur Rhys Davids, and Richard Maybery. Arthur Raymond Brooks and his SPAD XIII dogfights with eight Fokker D.VIIs.
08. No Room for Error (8/30/07): Low-altitude dogfights are portrayed. Art Fiedler and his P-51 Mustang in World War II; James H. Kasler and his F-86 Sabre in the Korean War; Robin Olds and Steve Croker in their F-4 Phantom II in the Vietnam War.
09. Night Fighters (09/21/07): The history of dogfighting in darkness is covered. Radar equipped F6F Hellcats shoot down seaplanes, and P-61 Black Widows score kills in World War II. The F3D Skyknight downs a faster MiG-15 in the Korean War. USAF F-15 Eagles and planes with stealth technology oppose MiG-29s in Operation Allied Force.
10. The Bloodiest Day (12/03/07): May 10, 1972, was the bloodiest day of air combat during the Vietnam war. The episode includes battles fought by Bob Lodge and Roger Locher.
11. P-51 Mustang (12/04/07): In the European theater of World War II, the P-51 Mustang became one of the conflict's most successful and recognizable aircraft.
12. Dogfights of Desert Storm (12/05/07): American fighter pilots pit F-15s against Iraqi MiG-25s and advanced Mig-29s as part of Operation Desert Storm.
13. Tuskegee Airmen (12/06/07): The Tuskegee Airmen were African-American pilots of the 332d Fighter Group. They distinguished themselves as one of the most successful fighter groups of World War II, despite the bigotry and prejudice they faced from their own countrymen.
14. MIG Killers of Midway (12/07/07): Recalling Vietnam War battles involving planes from the USS Midway.
15. Battle for the Falklands (XX/XX/XX): The 1982 Argentine invasion of the Falkland Islands triggered war with the United Kingdom. VTOL Sea Harriers take on Mirages and A-4 Skyhawks. The British establish air superiority, but the Argentines sink several ships with wave-top level attacks in A-4s.
16. Supersonic (XX/XX/XX): Stories of the development of jet aircraft and their subsequent introduction into combat. Includes stories of test pilots who were the first Germans and Americans to fly these aircraft and the air battles that were fought through the years at supersonic speed.
17. Death of the Luftwaffe (XX/XX/XX): The Luftwaffe's last great offensive, called Operation Bodenplatte, was launched on January 1, 1945. Oscar Boesch was a German pilot who took part. Sandy Moats and Alden Rigby were American pilots whose airbase was attacked by fighters. After this day, the Luftwaffe was shattered as an effective fighting force.